There is always a first time for everything. When I was offered the position of a reviewer for HiFiToday.com, truth be told I was somewhat terrified at the prospect of having to formally review an audio component for the first time. Considering the fact that I’m a relative neophyte in the high end audio world, I chose to play it safe and review a relatively low cost budget component which I have experience with and had listened to before – or so I thought!

Usher Audio Technology is a Taiwan based company which has been producing loudspeakers for well over twenty years. They are most recognized for their Be-718 stand mount which garnered worldwide acclaim from both the audiophile press and users alike. This was their bestselling model until its phasing out recently. Their designs in the past have been tweaked and signed off by Dr Joe D’Appolito. Being a relatively large player in the audio world, Usher has managed to achieve high levels of vertical integration and they manufacture almost everything in house including extremely high quality drivers and most of the crossover parts. They have a range of loudspeakers starting from a very reasonable Rs 25,000 to Rs 12,00,000+ suiting everyone’s budget. Their drivers find wide appeal and are considered by very many to be an extremely credible alternative to Scanspeak’s crumpled paper driver and actually measures better than the original. They are also well known for their DMD tweeter and the beryllium midrange which are state of the art, being used in their top of the line Be-20 loudspeaker. 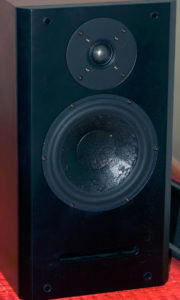 The loudspeaker being reviewed today is a lot more humble in its aspirations. The V-601 is a relatively large 2-way standmount loudspeaker. This however is the smallest loudspeaker in the V series which sits atop the entry level S series. The V series consists of the V-601 standmount, the V-602 floorstander, a larger D’Appolito configuration V-604 floorstander and the V-603 center channel. The V-601s should be put on a solid pair of stands to sound their best. For the review I used the Usher RWS-729 stands made of wood and marble.

The speaker measures 23.8cm x 29.2cm x 44.5cm and has 1” thick walls made of MDF. They are extremely well built and weigh in at a solid 12.6 kg suggesting extensive use of internal bracing. They pass the so called audiophile knuckle test flawlessly, the enclosure appearing to be completely dead. The use of solid cherry wood veneer suggests no effort to cut costs or corners in any way. The front baffle is painted dark to give it a subtle contrast to the rest of the speaker. It is incredible to find a reasonably priced speaker with such an attractive finish and the real wood veneer not only looks beautiful but will also have a very high WAF. The only little reservation that some might have is that it looks a bit old school. To me, I’d actually consider it more of a compliment that Usher has stayed true to its roots and not built something pretending to be modern with flashy aesthetics.

Each V-601 standmount possesses a 1” silk dome tweeter (9930-20NC) and a 7” treated (crumpled looking) paper midbass (8935A) driver. The frequency response is specified as 44 Hz-20 kHz (-3dB) and the crossover is set at a middling 2.22 kHz like most other Usher 2-way loudspeakers. With a sensitivity of 86.5 dB, a nominal impedance of 8 ohm and long term power handling of 70W, it does not appear to be a very demanding load on paper. However in practice, the V-601 really reveled when connected to a high current power amp. Also to be noted is the fact that it does go really low for a standmount – you probably won’t need a subwoofer with this loudspeaker unless you are a complete bass freak. The speaker is slot loaded at the front which allows easier placement than a rear port. I placed the speaker in a 14ftx10ft untreated room, about 1.5 feet from the ear and 1 foot from the side wall. I had zero issues of bass bloom or overhang with the said placement. The speakers received for demo were brand new and though at first they sounded a bit thin after two weeks of burn in this disappeared. 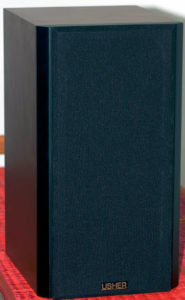 As mentioned earlier, I had heard the V-601s a couple of times in the past years and liked them a lot. When I started listening this time around, I was completely taken aback by how completely different and better they sounded, compared to the mental picture I had painted of them. For a while, I sat in disbelief that this was the very same speaker I had heard earlier. A quick call to ARN confirmed my suspicions. The entire V series has undergone significant silent upgrades over the course of the last few years. In the V-601’s case, the biggest change is a redesigned mid-bass driver. This appears to have made a profound improvement to the sound. It was time to throw out those previous impressions I had of the product out of the window! I was back to square-one and had to start listening afresh.

The thing that stood out for me in the sound of the V-601 was how clean and articulate it was in midrange reproduction. The speaker excelled in reproducing human voices – both male and female. When playing Norah Jones’ Sunrise, Feels like Home – Analog Productions, her sultry voice felt eerily realistic. The speakers completely disappeared when playing sitar strings in Anoushka Shankar’s Chasing Shadows, Traces of You – Deutsche Grammaphon. The instrument had tangible depth and it was possible to pinpoint each note in space. The V-601s presented a tonally correct picture that also excelled in macro dynamics. Roger Waters’ voice thundered across when playing Pink Floyd’s Run like Hell, The Wall – Capitol Records, on vinyl. As with any Pink Floyd album, the V-601 presented stunning sound staging across the board. Even modern pop/rock recordings which are not the best in dynamic range such as Sara Bareilles’ Brave, The Blessed Unrest – Epic Records, came across as full of life with rhythmically adept, foot tapping sound.

The speaker appears to be voiced a wee bit on the warmer side of neutral. For a fairly inexpensive speaker, the top end is extremely refined. This goes against the trend of more popular speakers in this price range that are much more in your face and throw as much detail (or is it distortion?) as they can. This makes metal tracks that are particularly unlistenable on entry to mid-range speakers such as the Swedish band Opeth’s Blackwater Park, Blackwater Park – Koch Records, perfectly at home with the Ushers’, without any listener fatigue. That says the most about the V-601’s character – it does not shout out any of its characteristics at first listen. It goes about doing its business in a polite, mature way which one can only appreciate on extended listening. Moving on to more sophisticated and better recorded tracks such as Jennifer Warnes’ Patriot’s Dream, The Well – Impex Records, the V-601 truly shines bright, with expressive vocals and finely nuanced instrumentation. For comparison, I had at hand my personal pair of highly awarded Usher’s Be-718 stand mounts. These cost about 2.5 to 3 times the price of the V-601, depending upon options, when available. Though not a fair comparison, I felt that in a few ways, the V-601 actually outperformed the Be-718. The mid-range definitely sounded a tad bit cleaner and the bass was also slightly more tuneful. One reason could be the age of my Be-718s’, which are close to 6 years old, or perhaps the redesigned mid driver in the V-601 is just better. Audio technology is constantly evolving so I’m not surprised that a lower end model sounds better than the previous gen high end. However the Be-718 was smoother at the top while being more detailed and also had significantly more bass weight and dug deeper than the v601. My guess is that the better built cabinet of the Be-718 is at play here. The v601 was certainly at ease in this comparison

I tried replacing my McCormack Preamp and Power amp with a Marantz integrated to check how the V601 behaves with a budget quality amp. Unfortunately the sound was nowhere close to what I heard with my reference amps. The bass lacked a bit of control, the mid-range became a bit muddier and overall the sound became veiled in comparison. If I were to get a pair of V-601s, I’d make sure I give it high quality amplification. Skimping on the amp might not yield very pleasant results. Sridhar Reddy suggests pairing the speaker with Usher’s own AU-7500 amp which is in a similar price range as the speaker itself.

Overall I was really enamored by the Usher V-601. I thoroughly enjoyed the six weeks I spent with the speaker. It sounds fantastic, looks great and offers extreme bang for the buck. What else can one ask from a loudspeaker? If you are looking to buy a speaker in the fifty thousand rupee price range, it would be a sin to not audition the Usher V-601. Even if you have a bigger budget, you should still listen to it. Otherwise, you’d be missing out on one of the best “Value for Money” loudspeakers.

I have been a budding audiophile since the days of my Dad's Philips 242 Turntable. I have a Master's degree in Computer Graphics and in the past have been credited as a Technical Director in multiple Hollywood productions including the Oscar nominated movie "Puss in Boots". Currently I build and optimize GPU rendering engines for mobile devices at Samsung Electronics.