The Sonodyne SRP202 active speakers are from the house of Sonodyne, one of India’s premiere audio equipment manufacturers, since the 1970s. Their venture into the studio market is about a decade old now, which first began with the introduction of the SM studio series of active monitors that have since received world-wide critical acclaim. It appears that their efforts in design and development of serious studio gear at their R&D centre in Kolkatta is getting further impetus with the introduction of more and capable active speakers to their lineup. The new SRP series is aimed at the consumer segment as well, so careful attention has been given to the appearance of the speakers. The series caters to a wide range of applications, starting with the smallest 201 to the largest 205 and are available in three color options, White, Black and Red, which provide ample flexibility to complement most living room décors. 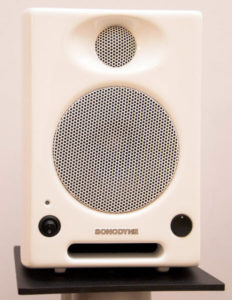 The review samples arrived well packed with adequate foam stuffing inside the shipping cartons. These white, powder coated monitors have a nice glossy finish, with beveled edges on all sides.  I found the build quality and finish of the speakers to be very impressive, which combined with its compact size, would rate highly on the WAF. The enclosure is cast entirely in aluminum, which helps squeeze out more internal volume, while keeping the overall size relatively compact. Visually, the front face and rear profile of this 4.8 kg enclosure are boxy while the sides have curvy, non-parallel edges that Sonodyne claims will minimize the buildup of standing waves. Additionally, fixed metal grilles to protect both the drivers of this two way speaker are provided, also finished in the same white color.

The face of this monitor has a slotted bass port, a volume control knob and the power switch. The front porting helps in minimizing corner loading issues thereby providing easier and more convenient placement options in the room. I particularly liked the stepped volume knobs which help balance the pair equally although they have to be adjusted with the thumb as they are flush mounted. The tweeter is mounted in the directive wave-guide, a widely accepted design factor that helps in better off axis performance of the monitor. The rear has an easily accessible, recessed inlet for the power cable and the XLR input. Four dip-switches take care of typical adjustments like Bass roll–off (at 100 Hz) for sub integration, bass tilt at 2dB and 4dB as well as Treble tilt at 2dB to aid in room compensation. There are provisions for wall mounting as well. The monitor is isolated from whatever it is placed on, by tiny rubber pads – so small that they are almost invisible. The SRP 202 has a 26 mm silk dome tweeter and a 4.5” CURV cone mid/bass driver. It is rated to a maximum SPL of 100 dB and its low frequency extension, is a humble 75hz (±2 dB). The drivers are bi-amped with Class A/B amplifiers of 25W each and there is an internal DSP optimization that is claimed to achieve a linear frequency response. 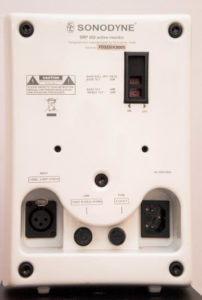 The rhythmic track of Gypsy, from Fleetwood Mac’s Greatest Hits (Virgin Records) highlighted the instrument separation abilities of the Sonodynes, the speakers managing to create a sense of space around me, especially during the background vocal interludes. The dynamics were reasonably good and overall resolution was also adequate with each instrument distinct and defined throughout the track. Stevie Nick’s voice did not exhibit any high frequency aberrations. Listening to My father’s eye from Eric Clapton’s The Best of Eric Clapton (Reprise Records), the music was smooth and the guitar notes were rendered unscathed, even in congested passages. The vocals were sufficiently weighty in the mid-range as one would expect from Clapton’s mostly baritone voice. The Licorice track from the well mastered Fourplay’s Exilir (Times Warner), suggested that the Sonodynes could go fairly loud without distorting, while retaining the sonic characteristics of the music played. It was a pleasure to listen to mesmerizing Bob James on piano accompanied by the punchy transients of Harvey Mason on drums.

Changing over to my PC, as a transport, I played Santa Claus is coming to town, a beautifully orchestrated song from Diana Krall’s Christmas Songs – HDTracks (24/96 WAV). Due to the well rendered macro dynamics, I pumped up the volume without feeling any urge to turn it down. The high pitch vocals, bass instruments, various piano notes and the drums were all in the right proportions though there was some mild irritation in the upper mids. The low level detail in Maroon 5’s Sweetest Goodbye from Songs about Jane (16/44 FLAC) was quite impressive. I liked this album but the recording is not great and it can get a bit congested in many tracks. The speakers did exhibit uneasiness in terms of transparency during such passages so I think they need to be fed with ‘better than decent’ quality music to sound their best.

The bass in Eva Cassidy’s Songbird, from her album The Best of Eva Cassidy (16/44 FLAC) has a tendency to sound bloated, but through the 202’s it had a nice texture. Eva Cassidy’s vocals had good presence in the room and her pitch variations were smooth and controlled. Thanks to the silk tweeter, the high frequency in this track was rendered very soothingly.  From the Bollywood flick Rehnaa Hai Tere Dil Mein, the song Zara Zara (16/44.1 FLAC) performed by Bombay Jayashree, was portrayed excellently by the Sonodynes and her vocals were flawless. When I moved my head sideways, there was a perceptible deviation in the centre imaging indicating issues with the directivity of the speakers but it worked well in the vertical plane. However, at the most ideal position, the phantom imaging was sharp and crisp. The panning of the flute from left to right depicted a soundstage as wide as the room itself. These speakers performed impressively with crisp imaging and fast paced transients that are hard to find in this price bracket. The Sonodynes were pitched against the 8020b active monitor from the industry acclaimed Genelec. First impression was that the micro definition was better in the Genelecs. They also gave me a feeling of ‘wholesomeness’ which, I felt, the SRP-202s’ fell a little short of. They could also dig deeper though they have a smaller woofer. The separation and imaging on the 202s’ were very close to the Genelecs but the latter had more body to the instruments. The 8020s’ have that rich lower mid frequency which was mildly constricted in the Sonodynes, possibly caused by its internal signal processing. The compression in the Maroon 5 track was better handled by the 8020. While playing Hans Zimmer’s soundtrack, Oil Rig from Man of Steel at high volumes, the Genelec generated considerable atmospheric tension which didn’t quite happen with the SRP-202. The SRP202 though, is roughly 40% cheaper than the 8020b so one cannot go wrong in buying it, considering the cost to performance ratio. 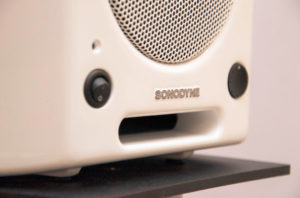 The SRP-202 is a highly compact, no nonsense, active speaker system that can produce clean music with precise imaging and widescreen presentation. They can go really loud and fill the room with ease while maintaining cohesion. The high frequencies are sharp and crisp and although I listened continuously over several hours at moderate levels, I could not sense any fatigue setting in. The same long listening session would have been possible at higher volumes, had the speakers carried a touch more refinement in the upper mids. I experienced a lack of deep bass in many tracks but that’s not something unexpected from speakers of this size. One can always add a sub to the setup if necessary. I briefly heard them paired with the Sonodyne Sub-6 (MSRP ₹21,530.00) in the showroom, which integrated nicely with the 202s’ and amply fulfilled the need for bass extension. I am sure the bigger monitors in the series would pack a punch owing to the bigger drivers and more power reserves under their hood.  Overall, it’s a good speaker and highly recommended for those who are on a tight budget, wanting to venture into the world of actives without dealing with the frustration of matching speakers and amplifiers. The build quality is world-class and the color options offered are quite rare in actives. These speakers can also be used to set up a home theatre, in a 5.1 or 7.1 configuration along with the S10 or S12 subwoofers. Evidently, Sonodyne has been very active in R&D and I believe they are already well ahead on their journey to become one of the most successful manufacturers in their space.

Santhosh is an ardent lover of music and movies. He likes to listen to new systems, enjoy making new friends in the audio enthusiasts' community and likes to follow or experience new developments in the audio/ video entertainment industry.