They say beauty lies in the eyes of the beholder. However there are certain products that win universal acclaim for aesthetic design. Some such designs remain as timeless classics such as the original Mini Cooper, the iPhone, the Valentine Typewriter, the Swiss Army Knife and many others. The speaker being reviewed here is one such product. If there ever were a beauty contest for loudspeakers, the Revel Performa3 M106 would easily romp home to victory. It is one of the most classically beautiful, eye catching and visually spectacular loudspeaker designs I’ve seen in a long time.

The M106 is built by the Revel which is owned by the Harman group that owns multiple audio brands such as JBL, Infinity, AKG, Mark Levinson, Harman Kardon and Lexicon and some others. Started by Dr. Sidney Harman and Bernard Kardon, Harman Kardon started what we know as the HiFi industry today. They have a rich history of vast engineering achievements in both the home Hifi and professional recording and broadcast industry. Revel is their luxury audio brand and as such commands a premium over more mass market brands such as JBL. Revel claims that science and engineering comes first before product design aesthetics. They pursue what they say is a tireless devotion to musical accuracy and a vow to treat distortion as a sworn enemy. Revel entered the high end audio industry with the Revel Ultima Gem that generated stellar reviews in 1997 and it was only fitting that I got to review one of its spiritual successors. I started auditioning this speaker with a great fervor as I had never heard a Revel speaker before. 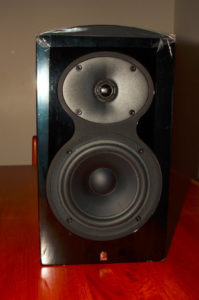 As mentioned earlier, the M106 pair was really easy on the eyes. If this is what Revel designs by claiming to ignore aesthetic concerns, I wonder what kind of no holds barred engineering goes on in the acoustic design of the loudspeaker. The M106 is a relatively large two way stand mount speaker. It belongs to the Performa range of Revel which sits between entry level Concerta and the cost no object Ultima series. The range consists of two bookshelf speakers featuring 5.25”(M105) and 6.5”(M106) mid-bass drivers and two floor standing models – the F206 and the F208 featuring dual bass drivers of size 6.5” and 8” respectively. The range also includes various subwoofers, center channels and rear channel speakers for HT applications.

The speaker measures 15” x 8.3” x 11” and weighs 8kg per piece. They are rear ported, bass reflex in design which suggests they be placed significantly away from rear walls. (More on this later) Port bungs are provided in the package in case you have trouble controlling bass. They are fitted with a 6.5” low distortion aluminum cone cast frame woofer and a 1” aluminum tweeter that features an acoustic lens waveguide design. The cone of the tweeter is well protected behind a metal grill. The speaker has a nominal impedance of 8 ohm and sensitivity of 87dB. The crossover frequency is a slightly high 2.3 kHz. The speaker loves power and it is recommended that an amplifier in the range 50-150W be used with it. The speaker has only one set of high quality binding posts which is rare to see these days. It means there are no pesky jumpers to deal with. The enclosures are fully curved which are claimed to be much stiffer than conventional box shapes. The speaker grilles are magnetic which means there are no ugly holes in the front baffle that are common in lesser designs. The grilles are also supposed to be acoustically transparent, I, however used the speaker without grilles. 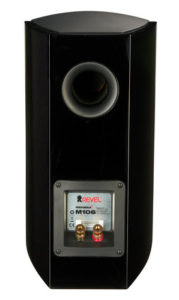 My review pair arrived in piano black finish. They are also available in a high gloss walnut and piano white finishes. I must again point out that the fit and finish of these speakers is in a different league compared to others in this price range. They wouldn’t be out of place at all in a tastefully done up living room. I did not receive any matching stands so I used my existing Usher RWS-729 stands placed in my 14ftx10ft untreated listening room. I did have issues with bass bloom at times on certain tracks. Pulling the speaker inwards into the room reduced this somewhat. I also did experiment with the port bungs. However plugging the ports changed the timbre of many instruments and made the speaker sound a bit thin and unnatural. All the listening impressions below are with the ports open. If you are considering this speaker, please be sure to ask for an audition in your listening room, if it is small. 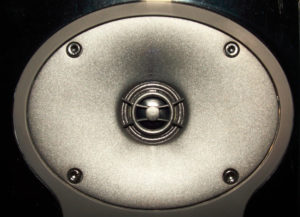 My first thought on hearing the M106 was of a speaker that exhibited a great sense of cohesive togetherness. The tonal picture portrayed was very even from the bottom to the top and did not appear to either exaggerate or downplay anything in the recording. While most speakers that claim to be of studio monitor heritage exhibit a large amount of dependence on partnering upstream equipment and can sound dry or analytical at times, the Revel M106 is opposite to that camp. The M106 appeared to be silky smooth, tonally rather dense with a clean accurate top end. Strangely enough, it seemed equally at ease with both my McCormack pre-power and a basic Marantz PM6004 for amplification. Of course, the former was way more resolving and refined, but honestly unless I put on my pointy audiophile hat, I did not miss anything with the Marantz amplifier. The speaker is forgiving enough for one to initially pair it with a basic amplifier/source and then move up the chain when funds allow.

I started off listening to this speaker with Mark Knopfler’s Golden Heart (Mercury Records) recorded in HDCD format. This is one of my all-time favorite albums that defies classification into a genre with Celtic, Cajun, Country and Rock thrown in for good measure. The M106 captured every detail and nuance of the sound effortlessly. What I most loved was how well the speaker produced the tones of Knopfler’s Fender guitar. Having watched him live performing Darling Pretty, the speaker absolutely nailed the tone of the guitar in that particular song. The dispersive capability of that waveguide based tweeter really shows in string instruments which sounded really organic. I also noticed that the ‘sweet spot’ of this speaker is wider than any others I’ve heard in the same room. This might be a huge benefit for some. Moving on, I sampled one of Neil Young’s more modern albums – Living with War (Virgin), a hard rock record that was written as a protest to the Iraq War of 2006. In the title track, his raw voice, energy and anger came across really well. This album has excellent dynamics and is a test for macro dynamic ability of a speaker. The M106 produced this quite pleasingly. To test how the speaker performs in Indian classical, I listened to Nadiya Kinare from Pt Bhimsen Joshi’s compilation album Life Story of a Legend (Music Today). This particular piece is one of his more melodic works in Raga Pilu – a bit experimental one might say. His deep, richly detailed voice was reproduced beautifully and better than what I’d heard before with my own speakers, capturing every nuance and detail.

To gauge the quality of female vocal reproduction, I tried out Sarah Brightman’s Time to Say Goodbye (Angel Records). In the track Who wants to Live forever, her soprano voice soars to incredible levels. This is a good test for both dynamic range and also for imaging and sound-staging. A good speaker is able to give a glimpse of her entire vocal range and is also able to resolve every instrument of the London Symphony orchestra within the room. The M106 did exactly that. When playing Dido’s No Angel (Sony-BMG) which has a lot of low down synth-bass, I realized that for a moderately sized bookshelf, the M106 produces a prodigious amount of low-end output. Even serious bass lovers who can’t live without a subwoofer might not miss it once they hear this speaker. However, this unfortunately is a double edged sword. The speaker might overload smaller rooms leading to some bass management issues. Please be sure to try the speaker in your listening room if you listen to a lot of bass heavy tracks. The provided port bungs may help ameliorate problems for some. It should also be noted that this bloom only exists on certain passages of a very few songs and should probably not be a concern if your room is larger. I compared the listening experience of the M106 with my Usher Be-718. The Usher is now discontinued but was priced in a similar range as the M106. I found the M106 to ever so slightly forward when compared to my reference speaker. This was forward in a good way – vocals had more presence, high hats and snares had more shimmer and decay and finally low bass was significantly more extended. However the Usher most definitely had cleaner, slightly more defined upper bass. Overall it was quite close – one may end up preferring either based on personal tastes. In terms of build quality, both the speakers are similar though the Usher weighs a lot more. The M106 easily wins in the looks department as it is more handsome.

I had a really enjoyable few weeks listening to the Revel Performa 3 M106 loudspeaker. It most certainly is one of the best overall buys in its segment. The speaker is neutral and at the same time very smooth sounding. The large sweet spot because of the acoustic lens waveguide based tweeter is a really nice feature. It is very forgiving for a high end speaker, being perfectly at ease even with budget amps. The speaker sounds, looks and feels like it is worth a million bucks. Overall I highly recommend that you audition this speaker if you are in the market for one in the 100-150k price bracket.

I have been a budding audiophile since the days of my Dad's Philips 242 Turntable. I have a Master's degree in Computer Graphics and in the past have been credited as a Technical Director in multiple Hollywood productions including the Oscar nominated movie "Puss in Boots". Currently I build and optimize GPU rendering engines for mobile devices at Samsung Electronics.