Forty five years ago Matthew Polk, George Klopfer and Sandy Gross founded Polk Audio in a Victorian house, just outside of Baltimore, U.S.A.   Since then Polk Audio has grown quite large and is considered amongst the successful loudspeaker manufacturers from North America.   Now they have a large product portfolio including marine and automotive applications.

This category, though always in existence, was never in the spot light as it has been in the recent past. Thanks mainly to Andrew Jones’s SP series of loudspeakers from Pioneer which garnered a lot of attention when they were released in mid 2011 for their excellent performance at a reasonable price. Polk Audio, which always had a great budget line up decided to introduce the T Series of speakers which would be in the similar price range as the Pioneer SP series (Andrew Jones is no longer with Pioneer having moved on to Elac, and Pioneer’s AV division is now owned by Onkyo).  Mr. Manmohan Ganesh of PROFX spoke highly of these and recommended their 5.1 package for a review. After having reviewed relatively expensive stereo pairs for the past few months, I readily agreed, curious to hear the sound quality of a value priced home theater set of loudspeakers. The Polk T series consists of a pair of T50 floor standers, T30 center-channel and a pair of T15 bookshelves.  The active PSW 110 subwoofer rounds off the bass effects channel in the system.  All of these arrived in 5 well packed boxes. The finish of the main speakers – in a black, wood grain vinyl finish was aesthetically adequate and looked pleasant.  The T50 tower is modestly proportioned at 92 cm x 20 cm x 22 cm (hxwxd) and relatively lightweight at 9.5kg. It sports a 1 inch silk dome tweeter and a 6.25 inch composite cone woofer. Though there are two more 6.5 drivers, these are actually passive radiators to assist in augmenting bass output.  The bottom of the slim cabinet has a plinth for stability and the rear has a single pair of five-way binding posts.  The T30 center channel has a pair of smaller 5.25 inch woofers with the same 1 inch silk dome tweeter, in a ported enclosure and the T15’s have a single 5.25 inch woofer with a smaller 0.75 inch tweeter again in a ported cabinet.  The center speaker is quite small at 48 cm x 16cm x 19cm (wxhxd) and 5kg weight, the surrounds measuring 27cm x 18cm x 17cm (hxwxd) and 3.2 kg each. A detachable grille is provided to protect the drivers for all the speakers.  The PSW 110 subwoofer is more substantial at 15kg and 37cm x 36 cm x 44cm (hxwxd), with a 10 inch Dynamic Balance composite woofer powered by a 100watt/200 watt (continuous/peak) class A/B amplifier in a bottom vented cabinet.  Control options on the rear of the subwoofer include volume, low pass and phase and connectivity consists of RCA low-level inputs (stereo or LFE/mono) and high level inputs and outputs via pin terminals.  The aesthetics of the subwoofer is quite good with rounded edges and a circular fixed grille design.  A set of feet help in raising the subwoofer to allow proper functioning of the bottom port.

I replaced my current front three speakers with the T Series and placed the T15’s on 18 inch high stands to the side/rear of my listening position.  The PSW 110 was placed to the right rear side of my listening seat about 3 feet from the corner which is the position in my room where a single subwoofer sounds the best. I set the power switch to auto on the subwoofer and disabled the cross over. After this I ran the Audyssey MultEQ XT set up from my Marantz SR6009 receiver.  Once the calibration was complete and saved, I changed all the speakers to small and set cross over at 80hz for all speakers in the receiver. 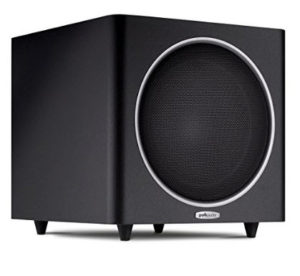 I had enjoyed the original Point Break with Patrick Swayze and Keanu Reeves, so I fired up the recent remake.  The initial dirt bike sequence was very engrossing through the Polk setup, especially when Utah jumps onto the narrow rock platform.  The front to rear panning of the sound was very good as he brakes and turns the bike just in time, while the chopper filming his stunt travels from the right rear of the room to the left side.  The T15’s were able to provide a convincing surround envelope, though I sometimes felt the sound to be directional as opposed to diffuse as I was used to from my reference Paradigm ADP 450 v3 dipolars.  Pointing the T15’s away from my listening position towards the rear wall and tilting them upwards helped the sound to spread better around the room.  Next I wanted to test the ability of the subwoofer and an excellent movie for this is Terminator Genisys especially the opening sequence narrative of how Skynet launches nuclear missiles to annihilate the Human Race. The scene where one missile explodes near the Golden Gate Bridge has tremendous LF energy and the PSW 110 was able to recreate this convincingly enough with adequate loudness and tactile feedback in my room.  I moved on to Jurassic World where the genetically modified Indominus Rex escapes from its enclosure and chases the hapless guard.  As the dinosaur stomps around, the effect in my room was quite good, however I felt that it fell short of my reference SVS Sb2000 in extension and overall impact.  I went to the Audyssey settings menu and found that it had set the PSW 110 at -7db. I pumped it up by 4-5 db’s but this caused the sub to over accentuate mid bass causing muddiness so I dialed it back to the original setting.  Ultimately one would have to play with the settings and placement to achieve satisfactory results.

Home theater is not always about room shaking bass or whizz–bang surround effects. The center channel dialogue delivery, in my opinion, is perhaps the most important feature of a system and in this area the T series performed admirably well.  Quentin Tarantino’s The Hateful Eight has plenty of dialogue between Kurt Russell and Samuel L. Jackson as they travel towards Red Rock in a stagecoach. The T30 conveyed this interaction in a very intelligible and lucid fashion and the tonality of the front speakers remained intact as the sound panned between these three.  Moving on to M. Night Shyamalan’s latest effort, The Visit, the front channel speakers delivered phenomenally well. There are a lot of spooky sounds in this movie that emanate from the front corners, especially the Grandmother’s strange antics in the night which were startlingly portrayed by the T50’s creating the desired tension and fright.  Again as the sound panned in the front plane the tonal integration of the three speakers was excellent.  Lastly I decided to listen to some stereo music from the T50’s using the pure direct mode of the Marantz SR6009.  The sound was smooth and enjoyable, with good midrange and decent bass extension.  However the tweeter wasn’t always well behaved, occasionally displaying a bit of sibilance and brightness. 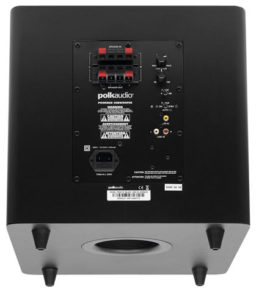 I was quite impressed by the capability of the Polk Audio T Series package. They were very good at conveying clarity and intelligibility of movie dialogues while handing the surround effects competently.  The one area where I felt a little bit let down was in the low frequency effects, but then again it was unfair competition for the PSW 110 subwoofer as my reference SVS SB-2000 cost more than all six speakers put together! If you are in the market for a low cost HT setup and are contemplating Home-theater-in-a-box type of systems, you would be doing yourself a great disservice if you don’t listen to the T-Series system first. Coupled with a decent entry level audio video receiver and source this system will perform far better and offers a better overall value.