Line Magnetic Audio is a China based manufacturer, with a short history from 2005. Known well for its classic horns, Western Electric speaker driver replicas and tube electronics, the company also appears to be moving into the newer technology sources gradually. The products by and large are regarded VFM (poor man’s Shindo is one such comment). “Made in China” often raises issues of quality in people’s minds. In my opinion, the products appear well made, with cost cutting visible here and there (feet of the tube amp I tried out earlier) and without design flair. However, it will possibly be a matter of time before that also starts improving.

It came very well packed from ARN in Bangalore – almost too well packed with 3 layers to remove. The packing inside was also of good quality. The DAC itself is not going to win beauty contests (mine had a champagne finish in the front, which frankly, looks nearly orange, though fellow reviewer, Sridhar Vootla, likes his silver finish). It does not feel luxurious to the touch – sharp edges on the back (which you notice when you take out the lid for tube rolling). That said, it is clean and functional with USB (ubiquitous XMOS), coaxial, optical, AES/EBU and balanced/RCA outs. The RCA out seemed a bit large, making the interconnects a tight fit – in itself, not a bad thing. I have always been DAC obsessed, having heard many in the ₹100,000 +/- price range (as opposed to the ₹250,000 + range DACs’ through which you get what you pay) and nitpicking. My LPs always offered a better musical experience – amazing presence – even if the Rega P3/24 I own costs far less, so it was time to check out the performance of the LM 502CA.

Me, herself and BPD defined

With hifi, I have a degree of gullibility – I always want to believe other (favorable) reviews and con myself into buying something new. So I have two trusted pairs of ears who help me– one my wife, who has soldiered on for nearly 25 years (since we met in LA and warmed the globe traveling to hifi shops) and the second, a “bosom Parsi dost” (BPD, in short, whose sensibilities and ears I trust). BPD wants to be nameless for now, and so we’ll let that be. So anything I write has been triple checked.

Please see my bio for my listening tastes, but to summarize – love midrange tone and BBC monitors.

Here is about as dramatic beginning as I can get for my first review: The LM 502CA DAC – I bought the review sample. This DAC is capable of decoding signals upto 32-bit/192kHZ PCM. The circuitry consists of both, tube and solid state outputs, the tube complement consisting of a 6z4 rectifier and a pair of 12au7 tubes. The DAC chip is the highly regarded ESS Sabre 9016 and the 502CA features Asynchronous USB transfer mode for reduced jitter. It also has dual transformers, Toroidal for the digital and EI for analog part. There are three display lights on the front along with 3 spring loaded buttons that indicate the selected output, along with a display window that shows the input and sample rate. Of the two outputs, I prefer the tube by a fair margin. It scores, for me on both hifi and musical involvement terms (as often both don’t go hand in hand – how strange is that!). The solid state sounds flatter, though more separated as it is drier. The tube also has higher voltage output (3V) which helps with my relatively low powered amps. The DAC was listened to with both the Coaxial (my place) as well as the USB (BPD’s) inputs. 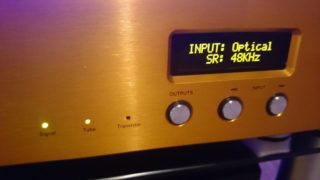 What it brings on is an amazing vividness to the sound – presence, finally!  Voices get projected outward – hence the singers come into your room.

When this is combined with the high level of transparency, the musical ride is thrilling.  Instrument textures are well delineated and fleshed out –many orchestral albums including Rachmaninov/Jansons (EMI) and Stravinsky/Chailly (Decca)  have good imaging width and depth.

Now we get out our Allen keys to unscrew the top. With the stock tubes, there is some upper bass emphasis and too much warmth (cello sounds more body than string, and piano not crystalline enough – well spotted, BPD) – change to JJ, Tung Sol and Mazda each bought their own strengths and improved the sound overall – the Tung Sol being the cleanest and most transparent of them all (but can get shouty, with trumpets having too much bite) and Mazda NOS tube being the most delicate (but a little muted, with sound moving backwards). I enjoyed both the tubes though. This allows you to create a good partner to other equipment (and mood). Though the LM can handle high resolution 24/192 content it cannot play DSD files.  Also it lacks a phase invert switch for listeners who like that option. It does not have a remote either and aesthetically it is utilitarian rather than luxurious. The stock tubes are decent, but you need better tubes to lift the sound.

Some trouble with USB – Use the driver: Since I left the disc given by LM Audio at home, BPD initially loaded the software from the XMOS site (forgot to give him the CD), and after about 45 minutes a horrible interrupt tone used to come in. This was uninstalled and CD file was loaded, but the problem persisted. However, other users did not have this problem. So follow instructions and load from the CD that comes with the LM.

Compared to similar priced DACs, including my Mytek, it is better fleshed out and vivid – something one notices especially with western classical. The strip-to-basics sound seems part and parcel of pro-audio DACs’ perhaps? We had the same issue with the mighty Prism sound Orpheus. Further I asked Sridhar Vootla, who also has this DAC to chip in with his impressions and this is what he had to say – “In comparison to my previous Arcam irDac, the 502CA sounds more analog with the added warmth and lushness of tubes.  The slight digital glare that I heard with the irDAC is completely eliminated and what is left is a highly resolving and smooth sound”. However, the higher priced DAC (BPD’s Playback Designs MPD3 – US$6500, with JRiver software) brings in significantly greater sophistication and refinement.  Music is quieter and more mature, the violins silkier – although all this is at 4 times the price of the LM.

It is the difference between eating fish curry at a traditional Malvani restaurant (think Highway Gomantak in Mumbai) to the experience one gets when you go to an expensive Japanese restaurant for sushi – more subtlety, better ambience. Want not? Then, waste not! This DAC to me is a champ at this price, especially in terms of transparency, tangibility and tone (3Ts – neat, no?). Its solid presence fleshed out sound makes it a DAC to enjoy music with, whilst impressing yourself with enough hi-fi tricks.