Kent Engineering  & Foundry was a metal working company on the banks of the Medway River, near Maidstone in Kent, U.K.  This unlikely locale was chosen by Raymond Cooke, an ex- BBC Electrical Engineer in 1961 to establish KEF in a Nissen Hut.     The first speaker produced by Cooke was the three-way” K1″ which featured drive units with foil-stiffened, vacuum-formed polystyrene diaphragms and the then revolutionary “T15” tweeter with a diaphragm made of “Melinex” (also known as Mylar).  In the mid 60’s Cooke reconnected with BBC and KEF became the exclusive manufacturer of the LS5/1A Monitor.  KEF performed extensive R&D into Material Science and developed “Bextrene” using which they launched a 5″ midrange/bass unit (B110) and a 3/4″ Melinex dome tweeter (T27).  These two drive units were used in the historic BBC LS3/5 Loudspeaker which by 1975 was known as the LS3/5A, a loudspeaker that became renowned as the “BBC Standard” and have die-hard fans even now.  Another notable point about KEF is that in 1973 they were the first loudspeaker manufacturer in the world to use CAD and with it the ability to match a stereo pair of speakers to within 0.5 db.  In the 80’s KEF engineers developed a tweeter small enough to be mounted in the bass unit coil, creating the revolutionary “Uni-Q” point source driver. The KEF Reference Series speakers were displayed at the “What HiFi? Sound and Vision” show – Bangalore in August 2015. I ran into Mr. Manmohan Ganesh, CEO of ProFx and KEF India Distributor, during the demonstration and requested a pair of speakers from this series for a review, as the sound was impressive in spite of the indifferent acoustics of the large Ballroom. He had the Reference 1, the bookshelf model, sent over.

The Reference 1 arrived, well packed in two relatively large cardboard boxes.  The boxes had precise instructions, in the form of illustrations, on easy and safe retrieval of the speaker from the box, which is a clear testament to KEF’s attention to detail. Wish other manufacturers followed suit, it would make packing and unpacking speakers a breeze. The speakers themselves were relatively large especially in depth which at 430 mm was almost equal to the 440 mm height.  However their width was fairly conventional at 205mm.  I was stunned by the impeccable Luxury Gloss Rosewood cabinet finish, which rivaled my own Ascendo C8 Renaissance’s Piano Lacquer Black. These were easily the one of the best finished speakers that I have come across, and totally live up to their “Reference” moniker.  Other available finish options are Deep Piano Black and Satin American Walnut.  The front baffle of these 18kg (each) speakers is made of an aluminum and resin composite and attached to the braced MDF cabinet with high-loss pads and high tensile bolts to add damping and rigidity to the cabinet. Drivers of this three-way bass reflex speaker consist of the “Uni-Q” concentric arrangement of a 25mm vented aluminum dome tweeter over a125mm aluminum mid range and a 165mm aluminum low frequency driver, with a rear vent.  The vented cabinet is unique in the respect that KEF provides two different length port tubes to tune the bass according to speaker placement and listener preference.  KEF terms this as “Flexible port technology” and is quite simple to use. Simply unscrew the top cap, insert the desired tube and fix the cap back on. Their recommendation is to use the short tube for speaker position away from the wall and the long one for closer proximities.  The rear of the speaker also sports an unique biwire/biamp facility.  KEF has done away with the ubiquitous short jumper cables/strips for dual binding posts, which are commonly seen on biwire/biamp speakers, and instead implemented a brilliant and simple design consisting of a pair of three chromed knobs. The top and the bottom knob are binding posts for connection to high and low frequency drivers, and the middle one, labeled “Link” is used to link the top and bottom binding posts by turning clockwise or vice versa to unlink depending on type of connection desired.  The bottom of each speaker can be bolted onto KEF stands (supplied separately) for additional rigidity.  The crossover is populated with high grade components and mounted on separate boards, decoupled from the cabinet for maximum performance.

The specifications of the Reference 1 points to a relatively low efficiency design with a sensitivity of 85db at 2.83v/1m with a nominal 8 ohm impedance dipping to a low of 3.2 ohms. This indicates requirement of a decently powered amplifier rated into 4 ohms with KEF recommending amplifiers rated from 50 – 200 watts.   Frequency range is 45hz – 35khz (+-3db), which can be tuned to either 40hz-45khz(+-6db) with the short port tube or 37hz-45khz(+-6db) with the long one.  Lastly the Reference 1’s can produce a peak SPL of 111db at 1m with pink noise which means they can play plenty loud. The manual has guidelines for placement – however I went ahead and experimented with various locations. The best position in my 4.3m x 3.7m room was at 1.2m from the wall behind the speakers and 0.7m from the sides, placed on 0.5m tall, sand filled stands.  They were placed 2.2m apart and initially I had them toed in slightly towards my listening position – 2.3m away, but achieved best treble balance when they fired straight into the room.  I also installed the short port tube into the rear vent in deference to their “free space” positioning.  There was no information provided on break in, however I let the speakers play for 25 hours before any critical listening. 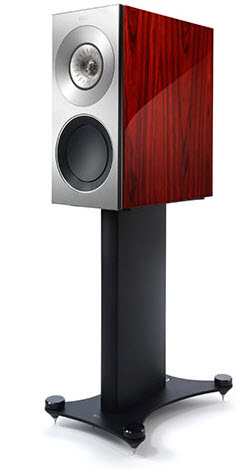 My very first impression of the sound was one of openness, airiness and tremendous resolution.  Listening to Wislawa – ECM (24/96, FLAC), by Tomasz Stanko New York Quartet, at about 3.40 min into the fourth track Dernier Cri, there are a series of cymbal strikes by drummer Gerald Cleaver.  These sounded uncannily realistic, from the sparkle and shimmer on the rise through the subsequent decay. Listening to this album through the Reference 1 was thoroughly mesmerizing.  Next I moved on to some female vocals from 25- XL Recordings (16/44.1, FLAC), by Adele.  On the song Send My Love (To Your New Lover), every nuance and inflection in Adele’s voice was, again, very convincingly reproduced, undoubtedly due to the superb resolving capability of the speakers.  Though I heard this album many times previously, I felt that the amount of vocal transparency afforded by the Reference 1 was one of the best I have heard.

One of the claims of the Uni-Q driver is that it acts a point source which helps in pinpoint imaging and expansive staging.  This was abundantly validated when I listened to the Jazz in the New Harmonic album, Primal Scream – Chesky (24/192, AIFF).  On the title track, this binaural recording positioned Jeremy Pelt’s trumpet to the right rear of the stage with razor sharp accuracy and the soundstage envelope extended well beyond the lateral width of the Reference 1, with David Chesky’s piano backlit to the left of the stage.  The depth of the stage was also rendered very well with appropriate layering of the various instruments.  I enjoyed this album immensely, so much so that the old reviewer cliché kicked in, wherein I got lost in the music and struggled to analyze the sound for this review.  Moving on to some rock from The National’s, Trouble Will Find Me – 4AD (16/44.1, FLAC), on the cut Demon, the strength in Matt Beringer’s baritone voice was very palpable.  One thing was clear that the Reference 1 was not very forgiving of bad recordings and though this album is sonically quite decent, there are some rough spots which were exposed by the KEF’s.  I had a similar experience when listening to The Rough Guide to Bollywood Gold – World Music Network (16/44.1, FLAC). On Yeh Sham Mastani, Kishore Kumar’s extraordinary voice shone through splendidly though the recording itself was poor. In fact it sounded like a mono recording (which it probably is), with a jumble of instruments and general lack of clarity. Another caveat is that recordings that have been mastered on the hot side of neutral, especially relating to treble balance, can sound overcooked at times through the aluminum tweeter. 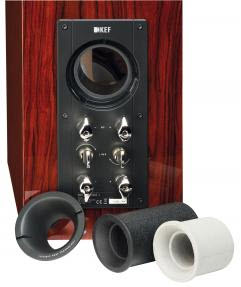 Ok, so far so good, but what about the bane of most stand mounted speakers – Bass? I cued up The Ondekoza – JVC (16/44.1, FLAC), the “Demon Drum Group” playing Japanese folk “Taiko” drums. Mikuni Gensokyoku starts off with deep drum strikes off to the left rear stage, and is then accompanied by another player pounding a much deeper drum to the right mid-stage. The visceral impact of this second drum was staggering in its impact, startling me as it thrummed in my ears.  The KEF’s 165mm bass driver was able to reproduce this percussive blast in a most convincing manner, and not only in depth but also in speed and texture.  It was very easy to discern the tonality between the two drums, the one on the left much lighter and smaller to the heavy, larger beat of the one on the right.  In a small to medium room, the Reference 1 will be more than adequate in bass reproduction, with the interchangeable port tubes aiding in further fine tuning.  Finally, I had to listen to my favorite Jazz pianist, Bill Evans from the Interplay – Riverside Records (16/44.1, FLAC) album. On the title track, Evans unique and complex piano performance was superlative through the Reference 1 – tonally colorful, rich and lush, again, one of the best reproductions of this ballad in my room.

My reference Ascendo C8 Renaissance is priced in the same ballpark as the KEF Reference 1. Secondly it has a coaxial driver arrangement that also tries to emulate a point source and is a 3-way (optional 4-way) ported, stand mount design.  So it seemed appropriate to compare these two loudspeakers.  The C8R had a similar airy and open sound but was smoother in treble reproduction. The Reference 1’s Uni-Q was superior to the coaxial driver in the C8R in terms of imaging focus, able to create a better holographic stage of instruments and vocals and pinpoint them within that stage. The envelope of that stage, however, was executed equally well by both that is to say that it was large both laterally and vertically beyond the physical location of the speakers. The all important midrange, especially in the vocal region was slightly better rendered by the Ascendo, which imparted more richness in this range, the KEF leaning towards a leaner sound.  Moving onto bass reproduction, the Ascendo again inched forward due to the larger cabinet and 210mm Kevlar woofer inside the cabinet.  Micro dynamic nuances and transients in the performance were better rendered by the KEF, which also seemed to provide a clearer window into the recorded acoustic for these instances, but in large scale dynamic shifts, the Ascendo was more capable, again perhaps due to larger enclosure and drivers.  Ultimately in the end, it will boil down to the Listener’s preference, and to my mind it was difficult to pick an outright winner.

With their gorgeous, drop-dead looks, exacting build standard and technological prowess the KEF Reference 1 loudspeakers are a rare but refreshing combination of beauty and brains.  They really do not have any weaknesses save that they are brutally honest in regards to source material and may not sound their best with poorer recordings.   Their superb resolution and extraordinary imaging will present the performance like no other stand mounter and will totally immerse their lucky owner into the music.  These certainly are a Reference by which others will be measured.