Though Heco is not a name that is immediately familiar to the Indian audio enthusiast, they have been active in Germany for almost as long as India has been independent, having been in business since 1949. In their six decades of manufacturing loudspeakers, they pioneered many current and ubiquitous loudspeaker driver staples such as dome tweeters and long throw rubber surrounds. They currently build their loudspeakers from an ultra modern manufacturing facility based in Pulheim near Cologne, Germany. Their Indian distributor, Anil Vemulapalli of Reverb Systems, highly recommended the Victa Prime 702 floor standers for a review in Hifitoday.com.

Heco has a large range of speakers on offer and the Victa Prime Series are their entry level offering. The Victa Prime consists of three floor standers, the 702 being the largest of these, in cabinet volume rather than driver count. The speakers arrived in separate cardboard boxes adequately packed. The boxes revealed a svelte, column speaker just 200mm wide but relatively tall at 1050mm and of average depth at 315mm.The finish was an attractive Black ash vinyl wrap (two other options are available, Espresso and Cognac) competently applied to the MDF panel cabinet which was designed in a truncated teardrop shape, tapering backwards. The speaker cabinet sits on a MDF plinth which has rubber pucks on the underside. Each 3 way bass reflex speaker has four drivers, a 25mm ferrofluid cooled silk dome tweeter with a short horn attachment for seamless transition to midrange, a 170mm midrange manufactured from long-fiber kraft paper and two 170mm woofers of the same material. The larger drivers are surrounded by an aluminum ring which has the mounting fasteners for the drivers and the tweeter is also surrounded by an aluminum plate. The silver aluminum color provides a nice contrast to the black vinyl and overall sans grilles the speaker looks quite handsome. A Heco logo is located at the bottom, just above the base plate. Around back are the well finished dual reflex ports and two pairs of good quality binding posts to facilitate biwiring or biamping.
The speaker is specified at a relatively high efficiency of 91db/2.8v/1m with a maximum power handling of 300 watts. The impedance range is 4-8 ohms, perhaps suggestive of the fact that a well designed amplifier stable into 4 ohm loads should be considered to drive these. Frequency response is a wide 25hz – 40 khz, though no decibel range is indicated. The two crossover frequencies at which the tweeter hands over to mid range and the midrange to woofers are 3.25Khz and 350Hz respectively. Recommended amplifier power range is 30 – 300 watts, though the 30 watts lower range seems a tad optimistic.

Break- in and Placement: 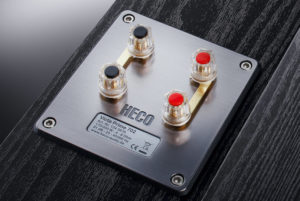 I hooked up the speakers to my relatively low powered Belles Soloist 5 amplifier and placed the speakers along the long wall of my 4.8m x 3.8m x 2.9m (lxwxh) listening room positioned about 1m from rear (wall behind the speakers) and 0.6m from the side walls. I immediately felt the treble was brittle and spitty and bass was very wooly and loose. Classic symptoms of brand new drivers. Though there is no break in duration specified in the manual, it is a foregone conclusion that these speakers require a bit of running in, which turned out to be 30 hours in my case. After this time, the speakers settled down nicely. One thing that stood out right away was the fact that provided these speakers are given a little room to breathe – which every speaker ought to be given – they sounded remarkably poised and composed in the bass frequencies. Having initially seen the two bass drivers I expected the speaker to overload my room leading to the dreaded boom. However that was not the case and that is great news for any speaker, let alone a reasonably priced one. On the other hand moving them too close to room boundaries did result in the aforementioned distortion. So one has to plan for adequate space around the speaker for optimum bass reproduction.

I started off with my favorite genre, Jazz, by Kenny Wheeler (He passed away recently, a huge loss to Jazz lovers everywhere). On the track Old time from Songs for Quintet – ECM(24/96, FLAC) the speakers imaged superbly, Stan Sulzmann playing Tenor Sax to the right rear of the stage, while Wheeler expertly wielded the Flugelhorn in the center.  There was excellent separation of instruments and the depth of the stage was well extended behind the speakers though the width did not stretch beyond the speakers.  With two bass drivers, I was eager to test the bass slam and dynamics of the 702 and cued up My Little Universe from Depeche Mode’s Delta Machine – Columbia(16/44.1, FLAC). The synth bass energized my medium sized room astonishingly well.  The bass frequencies were very well extended never sounding boomy, though they occasionally sounded one notey without adequate texture or pitch definition.  However they literally shook up the room generating tremendous SPL from my relatively modest powered amplifier validating their efficiency claims. I enjoyed this track so much so that I sat through the whole album with a grin on my face as the tactile electronic beats throbbed through my body.

Switching gears and listening to male vocals from Kishore Kumar’s Mere Sapno ki Raani, The Rough Guide to Bollywood Gold – World Music Network (16/44.1, FLAC) his golden voice was very cleanly and well rendered from this feel good, foot tapping film number. Though the quality of this recording is somewhat indifferent, the 702 handled it in a balanced and even manner without highlighting the shortcomings indicating that they are relatively forgiving of source data. This is an important characteristic for speakers in this price range as they may not always be fed with flawless material.  Moving on to David Chesky’s hi-res recordings of Jazz in The New Harmonic, Primal Scream – Chesky (24/192, AIFF), the track Sleepless in New York features Jeremy Pelt on the trumpet.  The piercing highs sounded smooth and non-fatiguing suggesting a well behaved tweeter, the initial brittleness that I experienced having totally disappeared during the break in process.  I moved on to Diana Krall next. Her sultry voice on the recent release, Wallflower – Verve (24/48, FLAC), was portrayed realistically with her signature huskiness intact.  Though the Heco performed admirably well in the critical mid range, occasionally on certain tracks I did notice a minor cupped hand coloration, leading to a slight hollow sound. 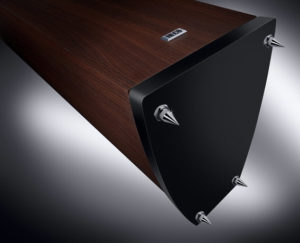 Though I did not have a floorstander handy to compare to the Heco, I had my trusty Paradigm Studio 20v3 stand mounters, which at $800/pair when they were available is in the ballpark price range.  The Studio 20v3 sounded slightly more refined in midrange with minimal distortion.  In treble both of them seemed similar, with the Paradigm sounding a little smoother.  The Studio20v3 pulled ahead in imaging precision however, reinforcing the traditional strength of book shelves, though they were not as adept at soundstage depth which was much deeper with the702’s. In bass extension and large scale dynamics the 702’s were decisively superior, though the quality of bass through the Paradigm speakers was more nuanced and textured.  Ultimately though they could not play as loud as the Heco702’s and in belting out high SPL, the Hecos’ were the undisputed winners.  Also on large scale music the Hecos’ were more convincing whereas the Studios tended to miniaturize the performance.  Preference for either speaker will depend on the type of music one listens to and there was no absolute winner.

Any time I review low cost floor standers, I am usually skeptical about their sound quality having heard some badly implemented speakers in the past.  Well I am happy to report that my anxiety was unjustified, at-least in the case of the Heco Victa Prime 702. They comfortably allayed any of my misgivings especially in the low frequency where they managed to sound poised, balanced and well behaved.  At no time did I detect any bloat or boom.  Moreover they were able to dig deep and generate outstanding bass extension along with great dynamics.  Mid-range and treble was also a delight to listen to, voices sounding realistic and instruments lush and tonally rich.  These characteristics coupled to their relatively affordable price make these an unbeatable value and if you are looking for loudspeakers in this price range these are a must audition.