Founded some 65 years ago by Georges Cabasse, Cabasse is one amongst the Big Three Loudspeakers manufacturers from France, the other two being Triangle and Focal.  Their initial clients included movie theaters, and they also manufactured professional active speakers up until the ’80’s.  In the ’90’s they developed coaxial drive units based on their “Spatially Coherent System” principle. During the 2000’s Cabasse changed ownership a couple of times first acquired by the Canon group and currently owned by the AwoX group. They are based out of Plouzane, France and are one of the few manufacturers that have their own Anechoic Chambers for testing and R&D.

After the conclusion of my recent KEF Reference 1 review, ProFx’s CEO Mr. Manmohan Ganesh asked me if I would be interested in reviewing the Java floor stander to which I readily agreed as I was quite curious about these speakers, having never heard products from this brand before.  The Java belongs to the midlevel MC40 series of the Cabasse’s extensive loudspeaker range, the other speakers in this level including a book shelf, and a center channel.  These speakers have been around for a while having being introduced 6-7 years ago.  They arrived in two sturdy boxes and upon unboxing them, I was very impressed by the fit and finish of the glossy black finish.  Of course, it has become a cliché for many reviewers to comment on the suitability of a loudspeaker to blend in with fine furnishings, but in this case these were genuinely classy and I can imagine they will look great in any setting.  The speaker itself was quite tall at 110 cm, but sveltely proportioned at 25 cm width and 35 cm depth in a truncated tear drop shape and relatively light weight – considering that they are floor standers – at 24kg.  Some slight assembly was required to screw on the plinth and spikes.  The supplied plinth is an important component of the speaker design as these are vented from the bottom and need the clearance supplied by the plastic spacers of the plinth for proper low frequency response.  A nicely finished magnetic grille is provided as well.

Driver complement of the 3-way Java consists of one BC-10 coaxial midrange-tweeter assembly – consisting of 12cm ring and 2.7 cm dome – and two 17cm Duocell bass drivers.  The BC-10 is a trickle down driver based on the TC23 which is from their top of the line “La-Sphere” and “L’Ocean” speakers.  The two cross-over points located at 900 Hz and 3.4 KHz have been developed with listening sessions, measurements from the Anechoic chamber etc. and feature variable slopes.  Efficiency specification of the speaker point to a competent 90db at 1w/1m design with nominal 8ohm impedance that does drop to 3.4 ohms, so will require an amplifier capable of handling low impedances.  Though it has 2 bass drivers the frequency range was specified at a relatively high 59 Hz to 23 kHz.  Lastly this speaker can handle continuous power of 110 watts with a peak of 770 watts.

Initially I connected my Symphonic Line Kraft 250 amplifier, which outputs 250 watts per channel at 8 ohms, to drive the Java’s.  They did so admirably but the high power combined with the high efficiency was not a good match and I was unable to achieve a comfortable listening level with my preamp, as small turns on the volume knob equated to large gains in volume.  So I switched to the less powerful but equally good Trigon Tre-50m which puts out135 watts at the nominal impedance of the speakers.  This was a much better match but the best match was with my recently acquired Line Magnetic 501 IA, tube amplifier that is rated at 100 wpc.  I am quite sure even lower power will work very well.

The manual has some recommendations on placement with a minimum of 20 cm from the walls. However in my relatively small room the best position was much farther out into the room at 1.2m from the rear wall and nearly 0.8m from the side.  I preferred them firing straight into the room and without the supplied grilles.

I started off with my favorite instruments, the Jazz Trumpet wielded by Art Farmer from the Touch & Go – Music Jazz (16/44.1, FLAC) album. On the third track East of Brookyln, Farmer’s trumpet sounded very realistic indeed with growls and rasps and at the same time smooth without getting distorted as he hit high notes.  The soundstage depth was excellent, the trumpet playing about six feet to the rear right of the stage and other instruments layered nicely, however width was not as spread out, confined to the space between the speakers. Wanting to test their low frequency capability I cued up some Techno from Recondite’s Placid – Acid Test 2 (16/44.1, FLAC).  The title track’s synth bass sounded weighty and tactile with excellent pace and toe tapping, body swaying rhythm though the Java could not plumb very deep, despite the dual 17cm bass drivers.  Regardless the bass extension was satisfactory and will not detract from the overall performance.

Next I moved on to some mellow vocals from Alexis Cole’s Dazzling Blue – Chesky (24/192, AIFF) album. On Something So Right, her mature and sophisticated voice sounded deep and rich and the imaging was stunning.  Cole was situated to the rear centre of the stage and instruments spread around her with what sound like bar chimes very distinct to the right forward of the stage.  The BC-10 coaxial driver should be credited for this superlative image portrayal.  Moving on to a recent Rock release, 4 1/2 – Kscope (24/96, FLAC) by Steven Wilson, the track Happiness III has a unhurried start before all the instruments kick in and this dense instrumentation was very cleanly rendered with profusion of air around them.  The Java’s injected a great deal of resolution and clarity to all performances and sounded great on well recorded music. They were relatively forgiving of less than stellar recordings as well.

Time for some fusion – music from Conversations – Milestone (16/44.1, FLAC).  On the title track, the violin interplay between L. Subramaniam and Stephane Grapelli was a treat to the ears.  Again the imaging of the instruments as well as their tonality was exceptional.  Lastly I cued up an old pop recording of Suzanne Vega’s acapella rendering of Tom’s Diner from the Solitude Standing – A&M (16/44.1 FLAC) album.  This sounded phenomenal, with her cozy and intimate close miked vocals, creating an impression of her – physically in the room.  The Java’s were very good with female vocals indeed. 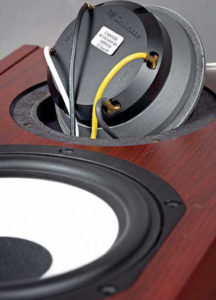 My ATC SCM 11 v1 speakers are relatively small, sealed bookshelves. However they are rated to 56 Hz (-6db) and when available were priced in a similar range to the Cabasse Java.  So I decided to compare these British book shelves to the French floor standers.   The immediate difference, easily heard was the “Back of the hall” sound of the ATC compared to a more forward “Front seat sound” of the Cabasse.  Next the relative resolution of the Cabasse was higher, especially in minor details in the sound.  The Java’s out-imaged the SCM 11’s handily but in terms of soundstage width, the ATC’s were able to throw sound beyond their physical location, though in depth and height both speakers were similar. Midrange lushness and richness was a forte of the SCM 11, the Java sounding leaner and in treble they were a bit brighter to the strictly neutral ATC.  In bass extension, both were similar, however the ATC played tighter undoubtedly due to the sealed cabinet.  Lastly in macro dynamics, the Cabasse were undisputed winners, able to play much louder and with more authority.

With the memory of my recent review of the Triangle Antal EZ speakers still fresh in my mind, I went into this audition with some inkling of what to expect from French speakers i.e. spacious, resolving, dynamic and easy to drive.  However I am happy to report that the Cabasse Java not only lived up to that expectation but handily surpassed it. Its open, clear and airy sound is immensely likeable as is its superb imaging capability.  A nice midrange and competent bass delivery rounds out, what to my ears, has been a very pleasurable experience.  With some care taken in amplifier matching these may very well be amongst the top performing loudspeakers in this price range.