You are here: Home / Articles / Building a HTPC – Intro

Face it, the major issue for some of us audiophiles or amateur audiophiles is not the sync or match between the speakers and the amps (Our ears are relatively loyal to us and by now several of us have our sources for purchasing several of our audio/video equipment). It’s the source I tell you it’s the SOURCE…..well, today let’s get down to understanding couple of things about it. The Source as far as I’ve felt is easier to handle if it’s made of as many non-movable parts as possible. The typical sources I see these days and the ones that I know about are a CD Player , a TT with a Vinyl  record, a media player preferably the one that plays lossless format (let’s face it, we have outgrown the ever so lossy MP3s ) and then there’s the HTPC. I am more of an HTPC person and so let’s delve inside the designs of building one.

To begin with an HTPC is nothing but a regular PC but the primary usage is in a HOME THEATRE whether for music/movies/Web Surfing/TV Surfing/View pictures and many more uses. Building a Music PC can be tricky depending on how future proof you want to be. I personally think one should never underestimate the extent of future proofing needed for our HTPC during the build unless it’s a build to last for shorter term.

HTPCs come in different shapes and sizes; there are the regular PC Towers, (placed horizontal or Vertical).  As per the typical  approach one can begin with choice of processor and the motherboard to go along with it and based on the motherboard and also the kind of use the HTPC is for, whether heavy for movie watching or gaming or just music etc. 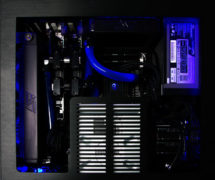 The primary choice we have for the processor is between Intel (The giant as we know) and AMD.  Intel processors are better at multitasking but at a price. AMD on the other hand were the first to introduce a relatively handy line of processors called APUs (‘Accelerated processing units’). APU simply put is a processor that combines a CPU and GPU (I’ll let you figure out these acronyms) into a single processor architecture. These are helpful if one is planning just to use the machine for music and movies only and not for graphic intense usage like gaming etc. AMD is also a manufacturer of graphic cards which we can get to at a later point.

The processors range from about ₹5,000 to… how deep is your pocket!! (Over ₹80,000 approx.).  It has been known that an AMD processor with a not so high end graphic card from the same maker is a good combo but an Intel with Nvidia graphic card is on par, if not better, in my opinion (Yes, I am biased towards Nvidia & Intel). Now coming to the future proofing part of the processor, when I ask you are you planning to watch 4K videos using your HTPC, and if so you are required to shell out a few more Rupees.  Further, let me tell you that AMD Richland cannot play your 4K ultra HD content and has rather low performance in video transcoding tasks as far as I’ve read, in a couple of articles, and if you are considering this usage, then my suggestion would be a discrete graphic card (an add-on graphic card  that you purchase individually). At this point I’d like to add – if you are looking to have the quietest and coolest (not hot) processor, with the lowest power consumption that is future proofed, then Intel is your preferred choice. As per my knowledge at this point of time I’d like to enumerate 3 different choices for your processor selection besides super cost effective configurations using Raspberry pi B+ or AMD Athlon AM1.

There are much higher priced builds which I would not want to get into right about now. In any of the above cases if you are certain about the processor you want then the next step would be to find a suitable motherboard to go along with it and as well as your needs and that’s a topic for another day and until then I bid you a happy listening,  watching or gaming.

Amateur audiophile in the making. I am more of a gamer (Computer games), with a hint of passion towards food and automobiles. Completed graduation in IT and had been employed in the gaming industry from 2009 till 2013 and now am self employed with a thirst for technological advancements and of course looking forward to adding as much as the tech comfort in my home AV setup.