In summarizing my visit to the 2016 What Hi-fi show and listing some of my preferred systems, I mentioned the Audio One room with Dali loudspeakers paired with Arcam and Marantz electronics.  The exact words I used in describing the sound quality of this system was “great stereo imaging, smooth highs and taut bass”. Now as most of you know for a system to sound good, the synergy between the components is vital, and evidently all the components in this system were working together.  One very vital component of any good hi-fi system is the cabling, and that – in this system, happened to be from Audioquest.  Audioquest was formed by Bill Low more than a quarter century ago in 1980 and is counted amongst the largest audio/video cable suppliers in U.S.  Low believes that performance of any cable matters more than marketing and goes about his business based on this belief while adhering to the “Do No Harm” principle, which prioritizes the original signal and tries to minimize damage to it as it passes through the cable.

Lesseps Cardozo, the National Sales Manager for Audio One – the distributor of Audioquest cables in India, graciously offered me a set of interconnects and speaker cables from Audioquest so that I could try and recreate what I heard in Bangalore, albeit in my own system with different speakers and electronics. Not quite, but Audioquest is quite creative with the nomenclature of their cables, their analog interconnects offering homage to bridges, water-falls, rivers and elements, while some of their speaker cables are named after rocks and trees. I received a set of Castle Rock speaker cables along with Water and Yukon RCA interconnects.  Build quality of all these cables is excellent; all of them composed of Solid, Perfect Surface Copper (PSC) conductors that according to Audioquest sound better than other types of Coppers.  Additionally the Water and Castle Rock sported their patented Dielectric Bias System which consists of battery pack attached to one end of the cable. This system – claims Audioquest – helps prevent energy storage in the insulation of the cable dramatically improving details and dynamics while reducing noise. The connectors for all the cables feature “Hanging Silver”, which is described as a process of “submerging the connectors into a vat of extreme purity silver resulting in a very thick direct silver plate”.  These cables also have other features which are clearly explained on the web site.

Since the cables supplied were demonstration samples, I assumed they had enough hours on them and did not consider any additional break-in time.  The interconnects have signal direction arrows which I complied with and the speaker cable ends are also marked with amplifier/speaker ends.  All the cables are quite stiff so a little bit of effort was required in inserting them into my system. I cued up Wolfert Brederode Trio’s Black Ice – ECM (24/96, FLAC). The track Olive Tree – exhibited a beautiful sense of space, the instruments sounding very open and airy.  The numerous cymbal taps shimmered with long decays and Brederode’s piano sounded tonally lush.  Next up was Arne Domnerus’s Jazz At the Pawnshop 2 – Naxos (5.6 MHz, DSD).  The ambience of the former pawnshop where the recording was made was wonderful, the cables helping to recreate the venue with astounding realism as if I was sitting there – background chatter and all.  Imaging was razor sharp and the soundstage extended to well beyond my speaker boundaries in all planes. This high resolution recording was exceedingly pleasurable to listen to.

I switched to female vocals from Kandace Springs’ debut album Soul Eyes – Blue Note (24/96, FLAC). Her sultry, alto voice on the title track was presented with superb fidelity, recreating a realistic sense of presence of the singer in my room. Moving onto Rock by Steven Wilson, the track Vermillion Core from the album 4 1/2 – Kscope (24/96, FLAC), is an excellent test of system dynamics/resolution.  As the track picks up steam and the guitars kick in, especially the bass, I heard no congestion or compression, the whole presentation sounding clear and dynamically explosive.

The Hammond B3 organ can hit some real low notes and under the capable hands of Dr. Lonnie Smith from his album Spiral – Palmetto (16/44.1, FLAC) I heard some astounding bass.  Listening to Mellow Mood the low frequency came in waves that washed over me and energized the room in an electrifying manner. The bass was not only extended deep but also had excellent pitch definition and was hard hitting. 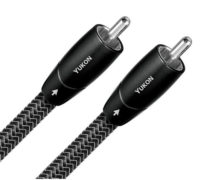 The select series from Kimber, namely the 3033 speaker and 1011 interconnects are my reference cables and their cost is approximately 75% more than the Audioquest loom.  The biggest difference I heard right away was that the Audioquests’ were slightly more forward in the treble in the manner that they accentuated these frequencies.  They did not sound bright by any means but the Kimbers were more laid back.  In the mid range, both of them sounded equally rich but I preferred the Kimber which seemed to have more tonal bloom to the slightly leaner Audioquest sound.  In the bass, I felt that the Audioquest was digging deeper, but in terms of texture, the selects were better.  In macrodynamics both were equally adept but the Kimber pulled ahead on microdynamics exhibiting superior retrieval of transients and other nuances in the sound.  Still this is excellent showing by Audioquest and these differences against the much more expensive cables were only gleaned in a side by side comparison.  In an absolute sense I could easily live with the Audioquest loom.

The Castle Rock, Water and Yukon cables from Audioquest are excellent cables that will take a high performance system to the next level.  While they are not exactly inexpensive, in the right system their value will be measured in the superb sound they will help reproduce.  They don’t intrude upon the signal but step out of the way allowing the connected components to perform to their potential.  If you are looking at cables in this range I can’t recommend these enough.